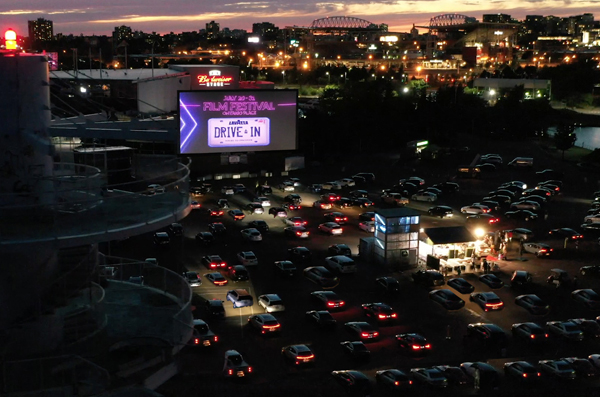 The ICFF, presented by IC Savings, and CHIN Radio/TV, came to an end this past September 4th with its last show in Markham, after an incredibly successful run in the cities of Toronto and Vaughan. The festival, born as a celebration of Italian and Canadian films, has reached the heart of thousands through its drive-in initiative, bringing people together again during this long and tough time of self-isolation and social-distancing.

Toronto – Astonishing results are the ones accomplished by the Lavazza Drive-In Film Festival, started at the Ontario Place in Toronto and presented IC Savings together with CHIN Radio/TV, the Embassy of Italy in Ottawa and the Italian Institute of Culture in Toronto. The event, held in collaboration with Rogers Communications and Christie Digital, has taken over the very hot Canadian summer through its new international movie agenda, and has established itself as one of the most successful initiative since the beginning of COVID-19 by bringing people back to the cinema.

Sold out after sold out the festival has presented films for everyone – young, adults, Italians, Canadians, Internationals, film lovers and not – recording around 15,000 admissions throughout the duration of the festival. An extraordinary outcome that meant a lot to ICFF and its team, but has also made a great difference for the Canadian Red Cross. In fact, a portion of ticket sales was set to go directly to the Canadian Red Cross, who would then give financial aid to “AiutiAMO l’Italia”, a project created with the Italian Embassy in Ottawa to help the Italian Red Cross and assist with COVID-19 relief efforts. Thanks to success of the event, ICFF was able to donate more than $6,000 dollars, an impressive result that makes us all very proud.

Over the years, ICFF has worked hard to promote Italian cinema, educating on the made in Italy and the noble traditions of Italian culture, while also apprising the local Canadian history and art. Born by the love for interculturality and diversity, this year ICFF decided to accept the challenge and take its mandate a step further, dedicating its festival to the countries heavily affected by COVID-19. Indeed, as a film festival ICFF immediately understood its role and toke it upon itself to create new opportunities where people could once again come together and feel happy and at ease, despite still going through very hard days. Foreign countries have never seemed so far like in the past months, with most of the world under strict lookdowns and with rigorous quarantines preventing people from even moving from their own houses, Lavazza Drive-In Film Festival had the power to shorten the distances and take the audience in a journey through France, Spain, China, Russia, the US, the UK, Brazil, India, Canada and, of course, Italy, through the magic of film.

Like every other year the main focus remained on Italy and Italian films, that now and in the past have gathered great numbers of spectators and have charmed audiences of all ages; with the only difference that this year they have entertained them from the seats of their cars. The Italian films presented at the Lavazza Drive-In Film Festival branched from comedy to drama, fascinating new audiences and generating a continuous sold out night after night. This achievement speaks for itself and once more it reminds us all about importance of Italian cinema in the past and today, and works to show how there is a strong need for more Italian content among the most diverse audiences here in Ontario and around the world.

During this unprecedent time in history, that has separated people and communities from each other, leaving each one of us alone and somewhat scared of what’s to come, ICFF wanted to use its platform and its festival to reconnect audiences through the universal language that is cinema. For this reason, Lavazza Drive-In Film Festival went above and beyond the simple screening event and created a full experience to give back the sense of community that has been lacking this past months. In its run, the festival has demonstrated to be a “problem-solving festival”, researching and constantly striving for the best solutions that would make the audience enjoy their time while also feeling safe and cared for. This wasn’t an easy task but as the saying goes “nothing worth having comes easily”, and in the end the hard work definitely paid off.

Three different locations – Toronto, Vaughan and Markham – and three different settings was a challenge that ICFF decided to take on when starting to set out the program of the festival. Despite all the obstacles that came along while planning an event during such an uncertain time, each night was in the end an undeniable success with headlights shining through the night and honks echoing as applauses after the screening of every film.

Even though it seemed as nothing was less suited to the times of a pandemic than a film festival, Lavazza Drive-In Film Festival proved the exact opposite, becoming a pioneer of a new type of festival suited to the COVID-19 prevention measures established by the Government of Ontario. The flashing cameras, VIP parties, and glamour celebrities, that usually create the classic film festival atmosphere, were replaced by the presence of great cinema personalities and important guests that participated in conversations with the hosts and also engaged in animated Q&As with the audience. Film stars and experts joined the festival and participated in the talks either in person or remotely from home, this way the event was able to host contributions even from guests from outside the country. Moreover, not only film stars shone under the spotlight offered by the cars’ headlights, but also the hosts, different each night, were notable personalities from great Canadian companies, broadcasters and film experts that, with their speeches and interactive conversations, succeeded in keeping the audience’s interest always high and making the whole event all the more entertaining and enjoyable.

The presence of big cinema and entertainment personalities as well as Italian and Canadian public figures, such as the Italian Ambassador Claudio Taffuri and the mayor of Toronto John Tory and many others, helped convey the importance of the Lavazza Drive-In Film Festival as an authentic and unique event that is shaping and changing the film festival landscape with its new ideas and initiatives.

Under the dazzling lights of the night sky the Lavazza Drive-In Film Festival has awarded four different prices for the remarkable achievements and performances shown in the films presented at the festival. The People Choice Award was given under a great round of “honks” to the Peanut Butter Falcon, an adventure comedy-drama that follows a young man with Down syndrome on his journey to make his dream come true and become a wrestler. The Award for Best Actress was given to Ana Golja, Canadian actress, for her performance in The Cuban, an heart-warming story of kindness, loss and memories, all tied up by the common ground that is music. The Best Actor Award was presented to Riccardo Scamarcio, renowned Italian actor and film producer, and finally the Special Achievement Award was handed out to Sara Gardon, esteemed Italian-Canadian actress.

But the Lavazza Drive-In Film Festival, did not stop there. To make the experience feel more genuine and complete, ICFF went all out to recreate and innovate the drive-in experience to make the whole event look and feel like a real film festival.

Every evening, as the cars started pulling in, they “walked” the red runway set up appositely to make the audience feel cherished and bring back the glamour that characterises film festivals. Furthermore on that note, the hosts of the Lavazza Drive-In Film Festival presented the films and the various speakers of the night from the luxurious seats of two Roll Royes parked on the red carpet; all together contributing into elevating the event to what can be described as a new-model of film festival.

Always keeping safety as a top priority, ICFF also teamed up with Pizza Nova and designed an app to deliver food directly to the vehicles. This way the Lavazza Drive-In Film Festival was able to avoid large crowds of people gathering at the concession stands during the event, and instead created a new and easy-to-use app that granted the delivery of food during the whole show with perfect and safe hand-out, without even having to set foot out of the car.

From start to finish the Lavazza Drive-In Film Festival generated a social media buzz and attracted the attention of the media, like Toronto Sun that didn’t hesitate to call the Lavazza Film Festival as “one of the First in North America”.

This year’s international schedule has in fact allowed a very diverse audience to come in contact, and created a platform where people not only came to watch a film, but also to form bonds and spark deep and insightful discussions on the modern and contemporary cinema. Overall, ICFF is proud to say that the Lavazza Drive-In Film Festival has proved to be an extraordinary success,  bringing an incredibly large audience to the cinema every night since July 22nd, when the festival launched its first film screening, and maintaining the presence at 600 people per night. This goes to show how much there was a need for everyone in the communities of Toronto, Markham and Vaughan, but also in Canada and around the world, to meet, socialize and reconnect after having been apart since the beginning of the year.

Taking a step away from what every other film festival seemed to be doing, the Lavazza Drive-In Film Festival showed a new, yet not fully explored, path for events to come. Instead of offering a virtual festival, held completely online, ICFF looked for new solutions, going back to the core of what film festivals really are about: people coming together to enjoy good movies. Neglecting the social aspect of the event would have meant compromising the integrity of the experience; therefore ICFF decided to bring back the drive-ins as a way to allow for a community of people to meet and screen movies, while still staying safe and respecting the COVID-19 prevention measures. Our innovative drive-in film festival has opened a new horizon of possibilities for future film festivals that have taken inspiration from our model to program their own events; one among others is TIFF, who will open its doors on September 10th with an hybrid film festival that will include at-home viewings, distanced in-cinema experiences, and drive-in movie screenings.

Lavazza Drive-In Nights Set to Launch in Vaughan and Markham