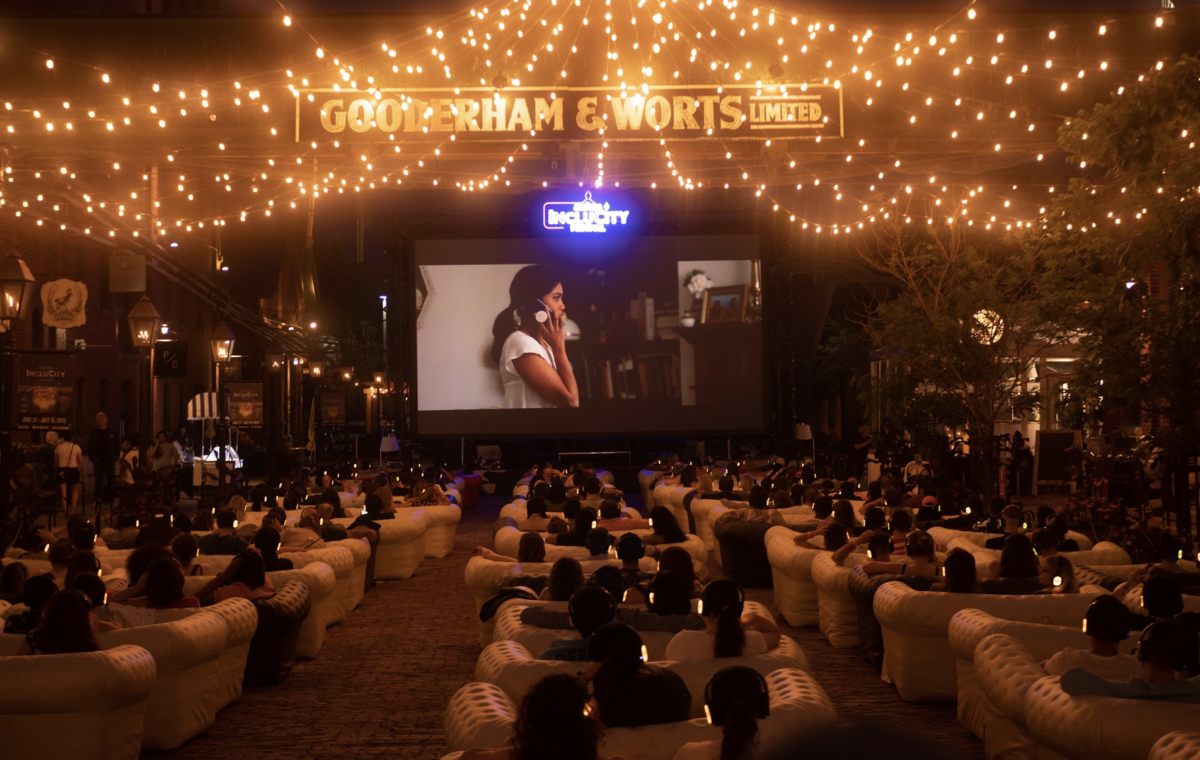 ICFF wins over the summer in the Distillery District in Toronto and other 4 cities with over 50,000 people in attendance

Canada triumphs with Drinkwater followed by the award of the American Remember Me: The Mahalia Jackson Story

TORONTO – The Lavazza IncluCity Festival, organized by ICFF, came to a close after three exciting weeks of international premieres and multicultural cinema in the Distillery Historic District in Toronto. With a lineup of 51 titles, the festival recorded unprecedented sold-out nights with over 50,000 attendees and media attention from across the world.

The Award Ceremony hosted on the Closing Night at the Distillery District has presented countless amazing guest stars and messages from the winners of this edition, starting with the acceptance speech from the Director of Marcel the Shell with the Shoes On, Dean Fleischer-Camp winner of the Lavazza IncluCity People’s Choice Award.

The Lavazza IncluCity Festival also unanimously awarded the Jury Prize to Across the River and Into the Trees directed by Paula Ortiz and starring an exceptional cast including Matilda De Angelis, Liev Schreiber and Josh Hutcherson. The film, based on Ernest Hemingway’s last full-length novel of the same name, is a collaboration between Italy, the UK, and Canada, bringing to screen a captivating, entrancing, and multi-layered drama through rich dialogues and breathtaking cinematography. Fully set in Venice, the movie captures the city’s misty soul mirroring the characters’ inner struggles with its black-and-white photography.

For the first time ever, the ICFF and The Distillery Historic District partnered up to host this year’s Lavazza Inclucity Festival in the cultural and artistic heart of Toronto. In a joint venture, the ICFF and the Distillery District transformed the iconic cobblestone streets into unique outdoor venues and a one-of-a-kind cinema village featuring many activations and a never-before-seen multicultural art exhibit, titled 6IX Art Outdoors, that highlighted the work and talent of fourteen amazing artists and muralists.

“We are so proud as a festival to have reconnected people in a new and exciting environment like The Distillery District,” said Cristiano de Florentiis, Co-Founder and Artistic Director of ICFF. “What was born as an idea to help people come together and enjoy cinema in the comfort of an outdoor environment, had surely become one of the biggest events of the summer in Toronto and across Canada. We are so proud to have been home to many amazing talents and artists this year and we congratulate all of the winners of this amazing edition under the stars.”

Winning the Best Director Award is the Italian-Canadian Stephen Campanelli for his latest film, Drinkwater starring the ICFF Award of Excellence winner, Eric McCormack. The movie is a wonderfully fun and entertaining coming-of-age story that brings to light the universal themes of friendship and father-son relationship with a fresh and unique sense of humour and impeccable direction from Campanelli.

Among the many screenings and premieres held at the festival, ICFF has welcomed the Honourable Dr. Jean Augustine, founder of Black History Month in Canada and the first Black Canadian woman to serve as a federal Minister of the Crown and Member of Parliament. She presented on stage her feature documentary Steadfast: The Messenger and the Message by the talented director, Fahim Ali.

The festival was proudly supported by the Federal Government, the Government of Ontario, Telefilm Canada, Ontario Creates and the City of Toronto. The ICFF also prides itself of the steadfast support of the Italian Government and the Ministry of Foreign Affairs and International Cooperation through the Embassy of Italy in Ottawa, the Consulate General of Italy in Montreal and Toronto and the Istituto Italiano di Cultura in Toronto.

The ICFF and Lavazza IncluCity Juries had an important and difficult task at hand to select the winners of the festival. Through much deliberation, these films, directors, actors, and producers were the lucky winners.

JURY PRIZE – ACROSS THE RIVER AND INTO THE TREES

The critically acclaimed film from Paula Ortiz without a doubt was the Jury’s selection for the Jury Prize, receiving top marks across all categories from each juror. Across the River and Into the Trees followed the heartbreaking and emotional story of an American Colonel reliving the horrors of World War II as he is given the chance to begin again. The message of hope and resilience paired with beautiful cinematic shots of Venice in black and white made for the perfect film to be this year’s IncluCity Jury Prize winner.

PEOPLE’S CHOICE – MARCEL THE SHELL WITH SHOES ON

The audience has unanimously awarded Marcel the Shell with the Shoes On with the People’s Choice Award of the 2022 edition for its captivating and heart-warming theme, which transcends spectators into Marcel’s story about going outside of your comfort zone. Most importantly, the juxtaposition of his sincere candour and his small body made Marcel an instant phenomenon that many people perceived as refreshing, funny and the same incredibly realistic in his emotions and feelings.

Home-grown talent, Stephen Campanelli, has taken the Best Director award for this year. In his film Drinkwater, Stephen Campanelli has demonstrated outstanding mastery in the craft of filmmaking and has created a uniquely fun and unapologetic Canadian film delivering wholehearted laughs and pivoting food-for-thought moments.

Actress Ledisi takes home the Best Actress Award for her portrayal of gospel anger and Civil Rights activist Mahalia Jackson. Ledisi’s powerful vocals along with her deep research into Mahalia as a woman as she faced the challenges of social inequality and the pressure to make secular music. Ledisi’s talents made for a stellar performance that captured our jury and audiences.

The award for Best Producer undoubtedly goes to Ericka Nicole Malone for Remember Me: The Mahalia Jackson Story. Ericka’s time, care and passion for filmmaking are clearly demonstrated in all her work, but it shines in Remember Me. Ericka’s skill can be viewed in every scene throughout the film and it is for these reasons Ericka has won the Best Producer Award.

Beloved Japanese actor Hiroshi Abe is the winner of the Best Actor Award for the film Tonbi. His astounding talent has clearly shown in this film highlighting his immense range and poignant interpretation of the character of Yasuo Ichikawa portraying the multitude of feelings, grief, love, loss and understanding of said thematic.

The famed Eric McCormack was the recipient of the 2022 Award of Excellence for his unmatched and astounding contribution to Canadian cinema and television in the past 20 years. The prize also recognized Eric’s stellar performance in Drinkwater portraying the scamming father Hank.

The 11th edition of the ICFF, presented by Lavazza, also had its outstanding share of winners as well highlighting the best creators from the Italian movie industry. The festival proudly presented films and initiatives in Toronto, Vaughan, Hamilton, Montreal and Halifax, as well as online Canada-wide with its digital platform. The ICFF Jury led by renowned Italian-Canadian producer Andrea Iervolino had intense deliberations and these films, actors, producers, and directors are the top scorers of this year’s edition.

Announced by Andrea Iervolino during the Closing Ceremony, Ennio by Giuseppe Tornatore wowed our Jury and was immersed in the incredible life of Ennio Morricone. Featuring film executives and music industry specialists, our Jury gave the film top scores across all categories making it the Jury Prize winner of the 2022 edition of ICFF.

An Honourable Mention goes to the directorial debut of Una Femmina by Francesco Costabile, which has, without a doubt, pushed the boundaries of storytelling and filmmaking for Italian and international cinema.

Of the 20,000 audience members in attendance over the duration of the festival, there was one film that stood out among the rest for our audience. Alessandro Gassmann’s Il Silenzio Grande is the winner of the ICFF People’s Choice Award. Audiences marvelled at the intimate and emotional storyline of the film. The ensemble of actors, directorial direction and overall theme won over audiences claiming hundreds of votes making it the clear winner.

Lina Siciliano from Una Femmina was our Jury’s top choice for Best Actress. The star delivered a performance of a lifetime teetering throughout the film between following in her mother’s footsteps or making her own legacy. The suspense and passion of Lina’s performance have rightfully won her the Best Actress Award.

Fabio De Luigi, the main star from E noi come stronzi rimanemmo a guardare directed by the talented Pierfrancesco Diliberto aka Pif, takes home the award for Best Actor. The actor known for his perfect comedic timing was no different in his new film. Portraying the unlucky but resilient Arturo, Fabio won over our Jury and made him the winner of this category.

The Manetti brothers take home the award for best director. Marco and Antonio have made films together since 1994 and their partnership has once again proven fruitful with their latest film Diabolik. The brother’s vision of a stealthy and ruthless high-profile criminal comes to life in an epic and suspense-filled film full of complicated stunts and intriguing plot twists. It was for their clear and well-executed vision that the brothers won the Best Director Award.

The ICFF has also celebrated the incredible achievements of some of the most important and pivoting personalities of Italian and Canadian cinema throughout its festival:

The ICFF short film Jury confidently chose DEAF LOVE as the winner of this year’s shorts programs. Deaf Love cleverly overturns societal structures and attitudes by placing Paolo (an unsuccessful musician) in the minority and having him experience the discrimination normally felt by the Deaf in our society.  While the island is a safe and comfortable haven for the Deaf, it is also a metaphor for isolation and non-acceptance.

For this edition, ICFF has been proud to partner with Rogers Communications, ICFF Official Communication Partner, media partner CHIN Radio/TV, and Christie®.

Inaugurated as a grassroots non-profit film festival in 2012, ICFF has developed into a multidisciplinary and multicultural organization that embraces all facets of the arts. ICFF has grown to celebrate over 19 different local communities through premieres and special events, attracting 51,000+ attendees at its summer initiative. For more information, visit https://icff.ca/.

About the 2022 Festival Sponsors and Partners

As Presenting Sponsor of the ICFF, Lavazza Group is committed to supporting the Festival and the art of filmmaking, bringing business and energy to Canada and offering festival patrons the opportunity to enjoy the best in storytelling through film. The Festival is promoted by the Ministry of Foreign Affairs and International Cooperation.